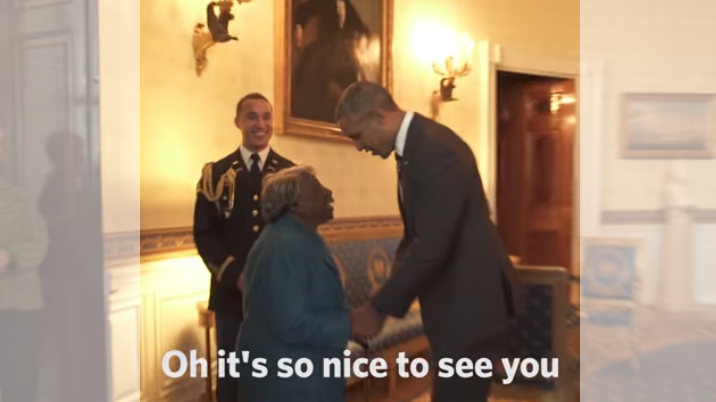 Virginia McLaurin is 106 years old and all her life, she dreamt of seeing an African-American president. When she had the opportunity to finally get into the White House and meet President Barack Obama and his wife, Michelle Obama, her age certainly did not stop her from squealing, and even dancing, in excitement.

Can you imagine someone at her age busting out the moves? Even the Obamas were surprised at her moves, with the president asking her to slow down.

In a video clip uploaded by the White House on February 21, McLaurin was seen giving the president an enthusiastic “Hi” while swaying.

Her visit was a part of the White House’s celebration of Black History Month.

When the First Lady saw her, she could not hide the admiration in her voice at the centenarian’s ability to move quickly, saying “I wanna be like you when I grow up.”

Here’s the video of the McLaurin’s White House visit:

McLaurin actually launched a campaign to meet the Obamas via a YouTube video in 2014. She wanted to tell Obama how happy to “see a colored president” and how he is an answered prayer.

Here is her YouTube video to meet the Obamas:

Beggar Pays for Rich Man’s Car Parking Meter? What For?

One Effective Secret to Winning the Hearts of Pretty Girls if You’re Scared of Them!