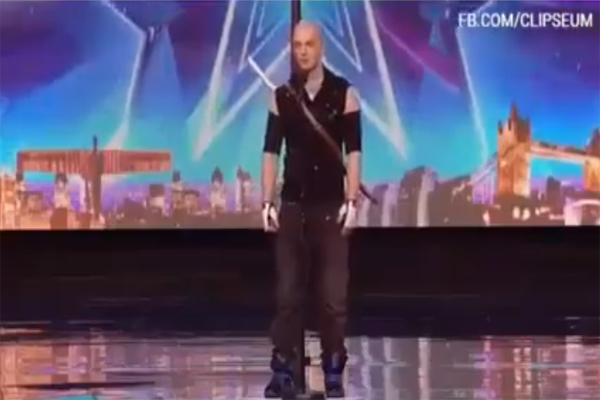 When asked to gauge just how dangerous his audition will be, Moldova-native Alexandr Magala responded by saying that he was practically risking his life for his stunts, and a few seconds into his performance, you’ll know just how right he was!

He started off quite tame while climbing the pole, showing off his strength, but that was just about the most relaxed state you’ll be in while watching what was dubbed as the ‘most dangerous’ audition in the history of Britain’s Got Talent. Even sharp-tongued Simon Cowell was crimacing and trying to cover his eyes with his hands in fear while watching Magala’s stunts.

The moment he took out a sword and put it in his mouth all the way to the hilt, you’d think that’s the extent of his stunt, but no! He just had to make it even more dangerous by doing some acrobatics, so much so that even the judges were torn between trying to watch the audition by peeking behind their hands and holding each other’s hands as they grimace over Magala’s death-defying stunts.

One of BGT’s judges, Amanda Holden, even revealed to Mirror Online that Magala’s stunt was indeed a dangerous one as she heard how the performer nipped his lung once during practice and

The show even got complaints from the audience who were concerned about why this dangerous act that made it to TV when it could potentially kill the performer. Watch the daring stunt here yourself:

Skyscraper: World’s Tallest Roller Coaster. Would You Take a Ride?

Laughing Is Indeed the Best Way to Start A Marriage!