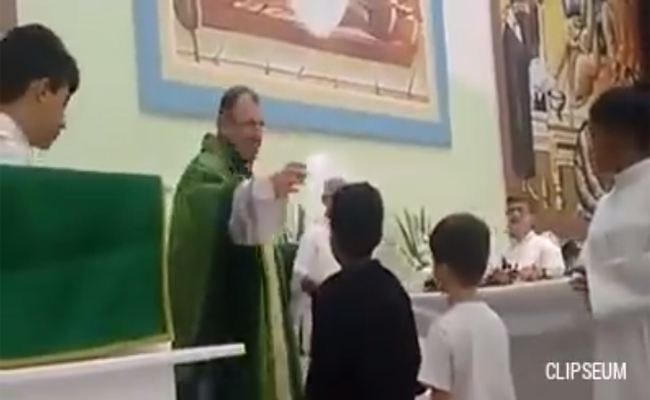 A video clip of a Catholic priest at an unidentified church in Brazil giving his blessings to kids in an unorthodox manner has enraged the Internet. You can see the holy man grabbing a fistful of the kids’ hair and yanking and shaking them around, plus a few slaps to the back of the head as well. The kids in the queue were said to be preparing for their First Communion.

Throughout the minute-long clip, some kids were seen covering their heads to avoid the priest’s reach, only to not be able to escape from his ‘blessing.’ At one point, a toddler even tried to get away by crouching down and crawling on the floor, only to receive a distant kick from the priest. A boy was also yanked so hard that he fell to the floor.

What’s even more astonishing is that adults were around and were simply watching the ‘ceremony’ unfold. It means that this could be quite a normal event for them, even if many of the web users have commented on how this kind of ‘blessing’ is bordering child abuse.

You can also see that when an adult passes by the priest while assisting younger kids, he would stop with patting their heads. He tends to be more ‘aggressive’ on doling out his blessing to the younger members of the church.

According to one Facebook commenter, it could be an old tradition of “roughing up” kids to make them realize just how hard it is to follow Jesus’ path and that only a few priests use this practice now.

But if you were the parent, will you allow your kid to line up to receive this priest’s brand of ‘blessing’? Watch the priest handing out his blessing here:

Kids Sometimes Say Strange Things, But Have You Heard Them Say Something this Weird?

It’s Just Four Girls Having Fun! You Might Learn Their Trick Too!