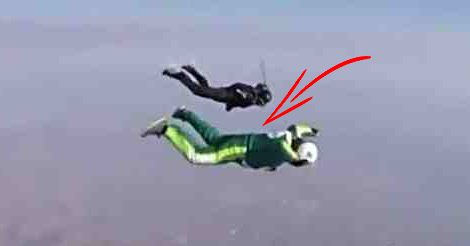 How much are you willing to risk your life to get that adrenaline high from performing extreme challenges?

Well, this man, 42-year old Luke Aikins, just staked his life more than the other skydivers did as he jumped out of a traveling plane at 25,000 feet, while most skydivers make the jump at 10,000 to 13,000 feet. What’s even more insane is he did it without a parachute! Yes, you can say it might feel like jumping to death.

Asked why he did that, Aikins said that he just sees this stunt as “the next logical step in a lifetime of extreme challenges.”

The achievement Aikins made on Saturday night, July 30, over the California desert not only gave him a rush but also a record. He was the first man to have attempted a jump without a parachute or wingsuit to help him control his fall.

And the only thing that could help him make a safe landing was a 100’ by 100’ safety net setup on the ground. To ensure that he will not plummet to death, Aikins had to make sure to land on the net and on his back, which was why he had to make a flip midair, when he reached a little close to the ground.

When he did land, he remained motionless for a few seconds! Hear that breath of relief when he finally got up to hug his wife? Whew!

Would you attempt the same thing too? It’s a crazy, crazy stunt, but at least he survived it! Watch his record-breaking skydive in the video below.

How to Send a Message Seen from Outer Space Using Cars

Watch: Motorbike Supercharged At 320Km/H And Heads Up Like Speeding Bullet

How Do You Catch Audience Attention and Glue Their Interest on You? This Teacher is a Legend!