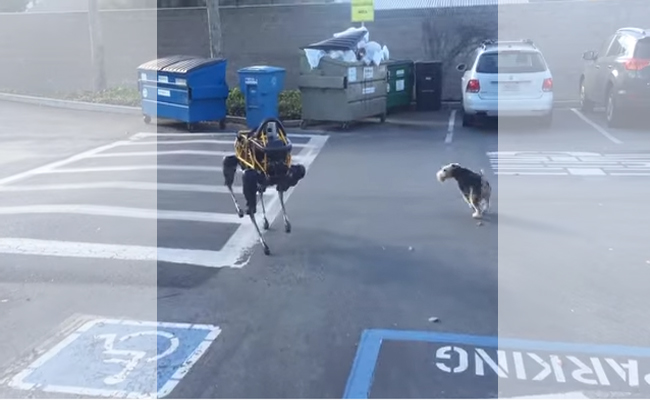 There are so many movies about robots, sort of a way of preparing us for the coming of the robots. We’ve had The Terminator movies, the RoboCop movies, Wall-E, I, Robot, and more.

And it seems that time is fast approaching. Google has developed a robodog, which they baptized as ‘Spot.’ It was developed by Google’s very own Boston Dynamics.

When Boston Dynamics posted a video of a face-off between Spot and one of their pet terriers, the real dog showed the robot who’s boss. The moment Spot started moving around, seemingly imitating what a real dog does, it got the terrier barking and all wound up. He chased the robot all over the parking lot until Spot bowed down to complete submission.

How would you react if you were put on the terrier’s spot? Watch this video below to watch the amusing interaction between the robodog and the real dog.

Ben Affleck Sneaks Matt Damon Onto ‘Jimmy Kimmel Live.’ Watch How He Does It!

WATCH: Baby Takes Its First Breath After Being Born With The Amniotic Sac Intact

Smart Baby Accidentally Falls in Swimming Pool! See Your Reaction to What His Dad Does