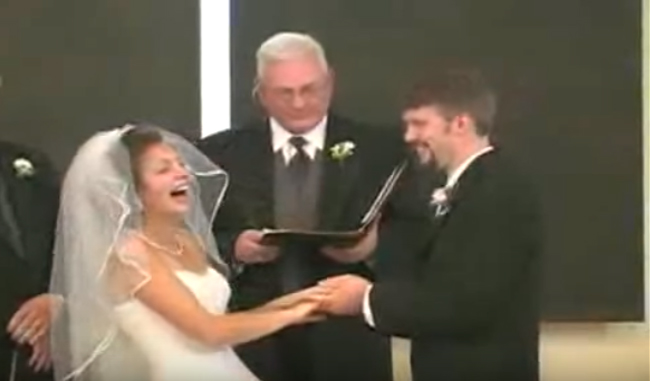 Saying ‘I do’ to the person you love is one of the happiest and most exciting moments of your life, but it can also be one of the most nerve-wracking moments you just have to get through. If you let your nerves get the best of you, you might struggle with even the simple task of repeating after the marriage officiant to say your vows.

In the case of this couple, the groom wrongfully said “wawfully,” following it up with ‘pancakey,’ instead of saying “lawfully.”

The result? He had his new bride laughing nonstop.

This will surely make for a great story to tell their kids in the future. At least they started their first day of marriage at the best note possible – with laughter!

Watch how the bride can’t seem to get over her groom’s mistake!

Hula Hoop with a Giant Truck Tire? See What Happens!

Melody from the skin? You got to forget Beat Box!

Other 3-Year-Old Kids Would Throw Tantrums to Get Their Way. This Boy Does It Differently