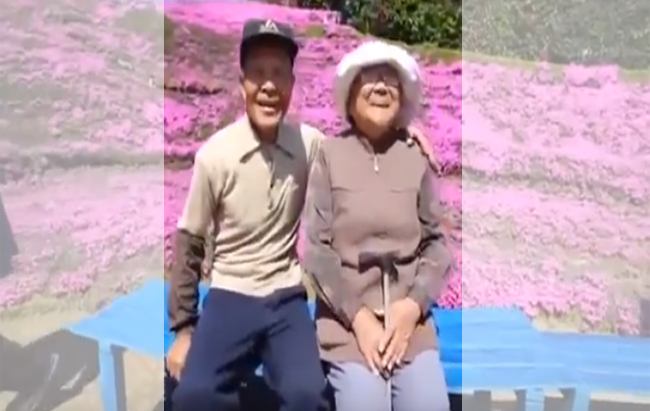 When a couple says their marriage vows, “for better, for worse, for richer, for poorer, in sickness and in health,” it’s a promise that is meant to be kept for a lifetime. And Mr. Kuroki is doing a fantastic job of keeping his marriage vows.

Mr. Kuroki married his wife in 1956, raised two kids, and worked as dairy farmers in Shintomi Town, Japan. They wanted to spend their retirement exploring Japan together, but at 52 years old, Mrs. Kuroki grew blind as one of the complications of her diabetes, according to a RocketNews24 report.

She started isolating herself, but Mr. Kuroki wanted to let her enjoy life once more, despite her condition.

When he noticed a pink shibazakura flower in their garden, he realized that not only does the flower look pretty – it is also fragrant.

He started planting more shibazakura flowers all around the house, successfully growing thousands of these scented flowers in the span of two years.

His plan worked! Slowly, his wife started enjoying gpoing outside of the house again while taking in the scent from the flowers, smiling as she did so.

After ten long years, their pink yard full of the fragrant shibazakura flowers drew the attention of tourists from surrounding towns, with as many as 7,000 visitors each day in spring.

Now, the Kuroki couple often wanders around the garden, smiling, and enjoying the flowers and their scent along with their visitors.

Watch the video below to see what the shibazakura-filled garden of the Kurokis looks like:

Miniature Model of a Scandinavian City or Real Nordic Life?