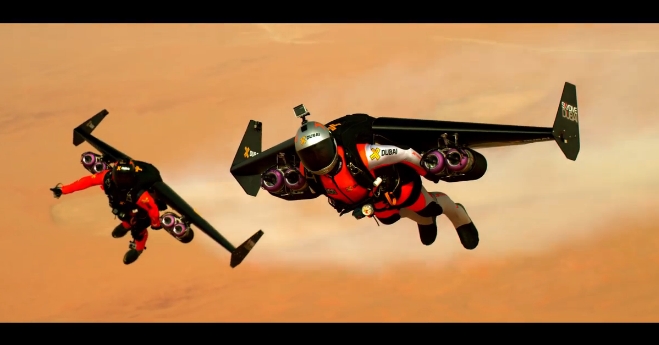 It’s not just camera trick, like what what they do with Superman in the movies. These men can really fly–of course, with the aid of jetpacks! In fact, the two daring men–Vince reffet and Yves Rossy–flew over Dubai in their jetpack suits like speeding fighter jets, crisscrossing each other and doing everything that we see fighter jet planes do in midair, defying gravity, wind resistance and all.

It all started in a helicopter where they boarded and which flew them till they got to a considerable height in the air. Then, they were released, and the mid-air adventure began. They chased each other, raced in tandem, and flew side-by-side, dominating the Dubai skies.

To feel the adventure and see what it’s like being up there but not in any aircraft, watch the video now!

Real Car from Cardboards–Would You Buy One?

Stop! Look! and Listen! What He Does with this Nokia Phones is Truly Amazing!

This Cute Dog Misses His Twin. You’d Probably Cry Too Watching Him!