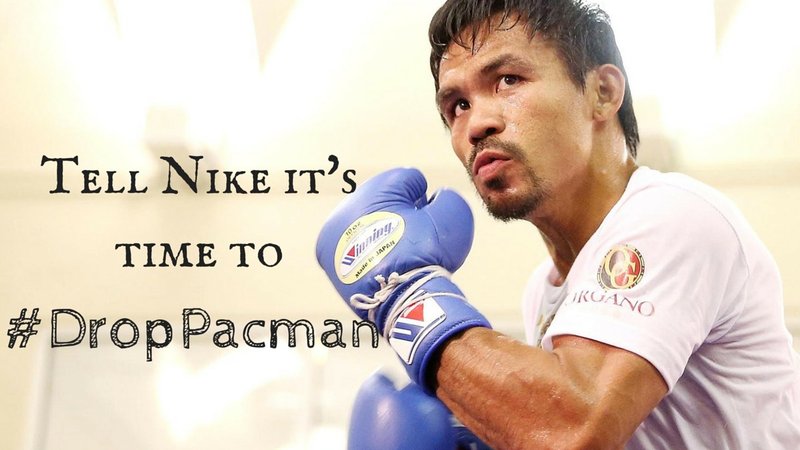 Nike severed any ties they had with Manny Pacquaio.

This came after Manny Pacquiao expressed his opposition against same-sex marriage and commented on how homosexuals are “worse than animals.”

Nike released a statement on Wednesday, saying “We find Manny Pacquiao’s comments abhorrent. Nike strongly opposes discrimination of any kind and has a long history of supporting and standing up for the rights of the LGBT community.”

The sportswear company made the termination official when they added, “We no longer have a relationship with Manny Pacquiao.”

Pacquaio’s anti-gay remark was part of a television interview aired on February 15 on Philippine TV.

Hours after the interview aired, he posted on his Facebook page, saying that he was “just telling the truth of what the Bible says.”

As the backlash grew, he posted this video on Facebook, with the caption stating that he is “not condemning LGBT.”

I’m sorry for hurting people by comparing homosexuals to animals. Please forgive me for those I’ve hurt. I still stand…

On February 17, a petition for Nike to drop Pacquaio, dubbed as the #DropPacman campaign, was started on change.org by Rutgers University graduate student Aries Dela Cruz.

This Country Has the Most Number of Deaths By Selfie So No-Selfie Zones Are Up!

Geometry Makes a Simple Basket Probably the 8th Wonder of the World!