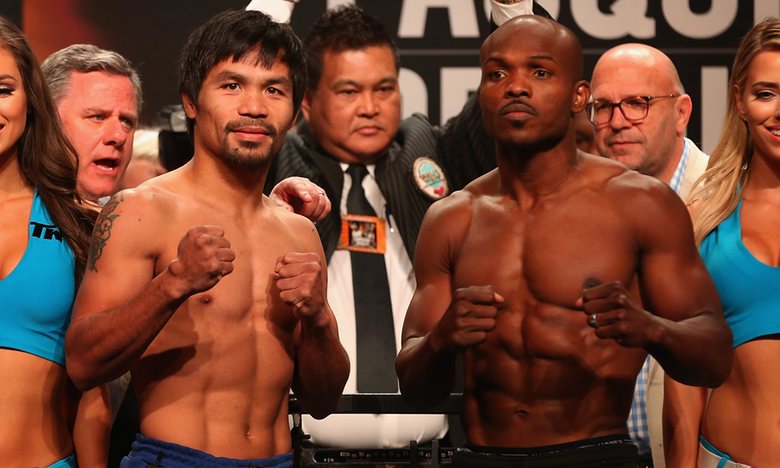 See Round-by-round updates on the next page.

Bradley positioning himself low again. fight momentarily halted because of low blow by Bradley. Action resumes again. Paquiao with a left to the body. Then with a left lead hand. Final minute of the bout! Pacquiao circles away, Pacquiao with a left, Bradley not bothered. Bradley chases Pacquiao. Ties himself in the ropes. Pacquiao counters! End of the fight.

A fire seems to have gone out with Bradley. He’s now circling Pacquiao and reverted to pawing with the jab. Pacquiao darting left to right and picking his spots, not pressing the attack. Bradley lands a right that moves Pacquiao back a bit, but that’s just about it. He’s going to need more – a lot more – to turn this tide. Not the most lopsided round but Pacquiao did more.

Bradley realizing he needs a knockput to win and that’s put him in vulnerable position. He’s missing wildly. Pacquiao not making him pay with every miss but he’s doing enough to score, mostly with left hands. Nothing from Bradley that round. It’s looking more and more like Manny’s night.

Bradley lands an uppercut to start the ninth, but the pace has slowed. And Pacquiao drops Bradley again – this time there’s no doubt about it! – a counter left in the center of the ring lands flush dumps the American to the canvas and the entire crowd of 14,655 is on their feet. A wonderful counterpunch that sends Bradley almost into a reverse somersaunt as he crashes to the canvas. Bradley is hurt! He beats the count and now Pacquiao is going for the kill. Bradley makes it to the bell. High drama in Las Vegas!

A slow start quickly gives way to more two-way action. Good right hand by Bradley but Pacquiao answers with a flurry of punches. Bradley tags Pacquiao with a massive right hand that stops him in his tracks. Pacquiao is hurt! The crowd is rocking, cheering for Manny but also chants for Bradley. Pacquiao in full retreat. Best round of the fight for the American.

It’s Pacquiao who strikes first, a left-right combo upstairs, and darts outside before Bradley can answer. Good work from Bradley here, who is measuring and using head movement to keep Pacquiao at bay. And down goes Bradley! A short right hook did it. A flash knockdown. The crowd is going wild! Replay confirms the right didn’t connect flush and it could have been ruled a slip, yet the referee’s ruling stands and Bradley faces an uphill climb.

The sixth doesn’t exactly pick up where the fifth left off. A slow start. Good flurry by Bradley gets Manny’s attention. Just over a minute left and Pacquiao darts in with another combo and the crowd screams with delight. A nice combo upstairs by Bradley but unclear how cleanly it landed. A very close round that could go either way, one of several swing rounds that could see scores all over the map if it goes the full 12 rounds. Manny looks faster and is starting to find his range. Bad news for Bradley, who is looking more and more apprehensive.

Bradley has backed up Pacquiao along the ropes and opens fire, connecting with a chopping right. A right-left combination for Bradley and now the corwd is cheering his name. And here comes Pacquiao – out of nowhere! He’s pouring it on in the center of the ring and the crowd is on their feet! Wow! They trade left hooks. And just like that a fight has broken out! Manny is lighting Bradley up with rapid-fire combinations. For a brief moment the Pacquiao of old. The bell rings and Teddy Atlas is in the ring screaming at Bradley before his charge can even take his stool. Best round of the fight easily.

Both fighters throwing if not landing more in bursts of action. Pacquiao throws a series of quick combinations upstairs with Bradley absorbing some and parrying the rest. A stinging left hand for Pacquiao, his best punch of the fight. Thirty seconds remaining in the round and Pacquiao is opening up. A great round for the Filipino. Not a crowd-pleaser but an interesting first act.

Pacquiao throws a left with bad intentions that just Bradley nearly swerves but it connects. The fighters are opening up here in the third and the crowd is loving it. Bradley misses wildly with a hook, but connects with a vicious right. Still awfully quiet in between the exchanges. Pacquaio showing good hand speed when he throws, using the jab with better effect here. Bradley with a left to the abdomen. Not quite enough. Pacquiao takes it.

Bradley still looking to establish the jab whie Pacquiao looking to … well, it’s not quite certain. A tactical opening, to put it charitably. Pacquiao trying to cut off the ring but Bradley using shifty lateral movement to subvert the efforts. A nice inside uppercut by Bradley followed by an inside hook. Good shot by the American. Pacquiao fires back with a one-two combo but Bradley darts safely out of range. Bradley misses and Pacquiao counters inside with a compact left hand. Another close round we’ll tip to Bradley.

And the 25th round of the trilogy begins. Pacquiao nearly halfway across the ring when the bell rings, looking to be the aggressor. The fighters circle one another pawing with jabs. Bradley connects with a left jab to the face. Not much action so far. Cheers of Manny! Manny! but crowd quiets waiting for a landed punch. Strangely quiet in the arena. A poor round. Difficult to score, but an overly patient Pacquiao managed to do less.

The ring announcer is introducing the fighters. A mixed reception for Bradley but not nearly as negative as before their second fight. Massive cheers for Pacquiao. And more cheers of Manny! Manny! as referee Tony Weeks gives the final instructions.

Now it’s Pacquiao’s turn. Lights go down and the highlight reel set to AC/DC’s Thunderstruck that’s been a staple of his pre-intro plays. Now he emerges from the tunnel to remix of Katy Perry’s Roar mashed up with Eye of the Tiger, an ear-to-ear grin across his face. Loud chants of Manny! Manny! as he climbs through the ropes.

Timothy Bradley is making the long walk to the ring. The song is New Level by ASAP Ferg ft. Future. Looks confident.

Here’s a look at tonight’s tale of the tape. The fighters will be making their ringwalks any minute now.

24 Cans of Energy Drink Would Do This to You? Horrible!

A 4-Year Old Is Getting ‘Married,’ But Wait ‘Till You Know Why!