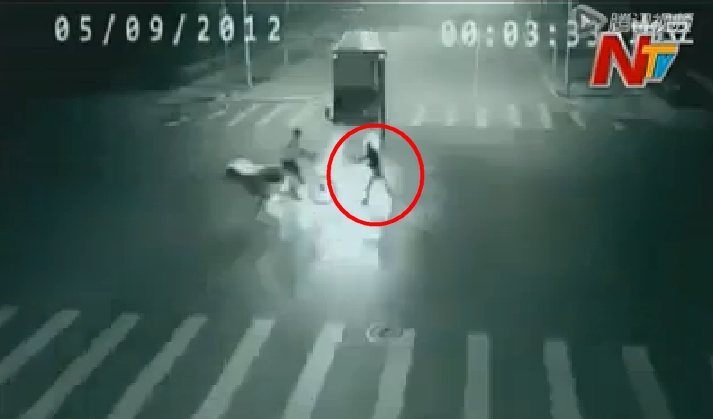 A man riding a bike with side-car was about to be hit by a speeding truck in an intersection when at the wink of an eye, a mysterious hooded super lady darts out from nowhere at the speed of light to rescue him just in time! Real or trick? Did it really happen or was everything merely computer edited?

On examining the video on slow motion, you’d see another incredible feat–after the hooded lady darted into the scene like a speeding bullet to save the bike rider, together they disappeared in a flash of light for a split-second (including the bike and side-car) and re-appeared on the other side of the highway, again in a bright light, safe and completely out of danger!

The bike rider appeared to be confused about what just happened and the hooded lady appeared to be asking the biker if he was all right. At that point, it was apparent that the hands and the face of mysterious lady gleamed in the dark. She tucked her hands in the side pockets of her jacket and walked away casually into the dark.

The truck driver, meanwhile, got out of his vehicle to see what happened and appeared to be shocked at how the biker and his bike and side-car suddenly re-appeared on the safe side of the highway. It’s noteworthy how the truck driver walked past the hooded lady seemingly without seeing her just before she disappeared in the dark.

Is this authentic or a hoax? Was it an angel, alien from outer space, or a super hero among the Chinese? They say, to see is to believe. So watch the video for yourself!

The Most Terrifying Subway Zombie Prank You’ll Ever Watch

Awkward Situations that Can Lead People to Wrong Conclusions

3-Year Old Kid Does Professionally at Mixing Sounds. But is that Talent?