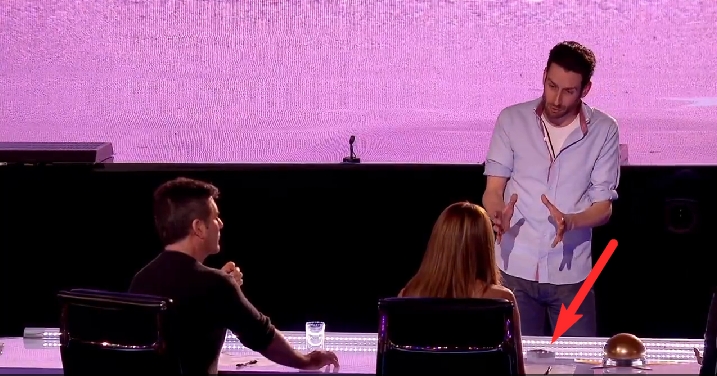 Clad in simple folded long sleeves polo shirt and jeans, this 31-year old magician, Jamie Raven, astounds both judges and audience with  his new and clever tricks with money bills and playing cards at a Britain’s Got Talent show.

At first, with the simple way he looked, there seemed nothing much to be seen from his number. But then he goes forward to the judges and, before their very eyes, transforms real British pound bills into Britain’s Got Talent bills with the caricature of the judges imprinted on them.

Well, that didn’t seem to impress the judges much either.

So the magician did his finale. He took out a set of playing cards with rough sketches of a magician drawn on their backs. Jamie then asked each judge to verbally pick a particular feature of a playing card in this manner–one is to pick out a color, another a character, and still another the value. However, since Simon was the boss among the judges, said Jamie, the magician let him pick the final card–color, character, and value.

Then, Jamie quickly flipped the cards by holding them with one hand while his thumb on the other hand flipping the cards from the bottom to make the series of sketched caricatures of a magician on the cards become animated. And amazingly, the caricature came to life and moved, taking off its magician’s hat and drawing something from it with its right hand. And guess what it drew out from the hat?

To see it right now, watch the video immediately!

Would You Be A Hero And Stop Bullying Too?

Watch How A Living Heart Beats When It’s Outside The Rib Cage!

He is the Sweetest Dad in the World. But His Daughter Called Him a LIAR!