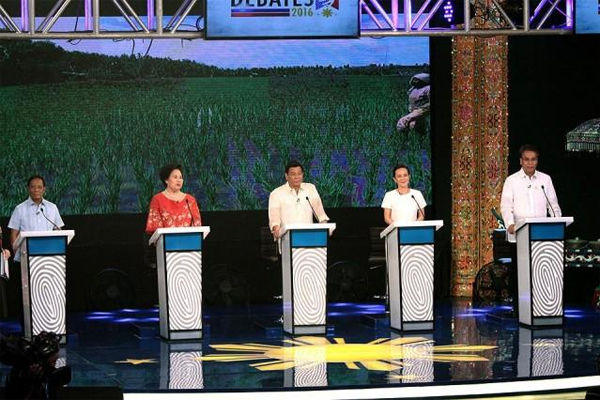 [nextpage]After 24 years, we finally have the first Comelec presidential debate.

Held at the Capitol University in Cagayan de Oro City on February 21, 2016, the Mindanao leg of the debate was the result of the joint efforts of the Commission of Elections (Comelec), GMA Network, and Inquirier.net.

In an interview with the ANCs’ Dateline Philippines, Comelec Chairman Andres Bautista said they staged the debate after the US Republican debates, wherein the aspirants will be given a one-minute time cap to give their opening and closing statements in an interview with.

There are four rounds during the debates to pick on the candidates’ brains about topics such as peace and order, development and poverty, track record, the issues in Mindanao, and constitution. Each candidate is only allotted 90 seconds to give their answers to each question and 60 seconds for rebuttals.

The questions asked during the debates are crowdsourced during the meetings held with the residents of Mindanao.

If you missed the live debate, you can watch the full replay video here. Hopefully, the answers and face-offs of our presidential aspirants can help you decide who to cast your precious vote for this May.

Just When You’re Losing Hope, A Miracle Like This Reels You Back In! Watch It Unfold!

How Would You Like to Live On as a Tree After You Die?