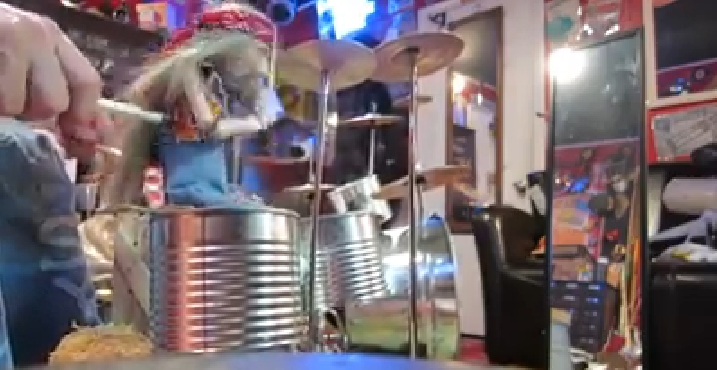 This sad-looking puppet drummer plays so realistically, as if really the one doing the drumming in the background rock music. It is dressed up like a real typical rock drummer, with long unkempt hair, a colorful headband and with matching colorful shirt and blue jumper jeans. The arms are fitted with sticks with which the human controller manipulates it with.

As the rock music plays, the controller moves the arms and synchronizes the movement with the beat of the music. The effect is realistic drum playing. The puppet drummer appears quite inspired with its drum playing though the head is always tilted down and the facial appearance (especially the eyes) is lonely.

Anyway, you’d glimpse from all this what drumming skill the human controller has–as well as his skill in puppetry. Later, when the music is ended, you’d hear the actual tinkering of the puppet’s drum sticks as they hit the miniature drum set. Even this sound is amusing to hear. To see how it sounds, watch the video!

25 Questionable Designs That Were Obviously Not Well Thought-Out

3-Year Old Kid Does Professionally at Mixing Sounds. But is that Talent?