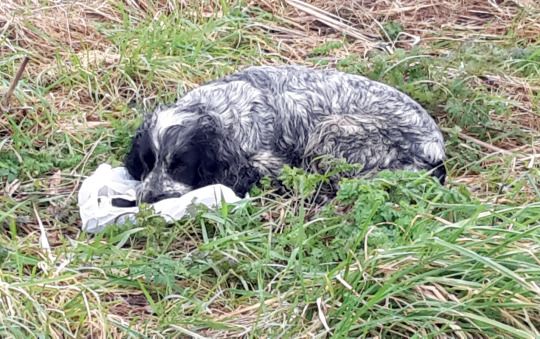 There is nothing more devastating than seeing your kids hurt, injured, or worse, dead.

That is exactly what this heartbreaking scene is all about – the grief of a mother dog when she found her dead pups.

Warning: The following images are upsetting.

This Cocker Spaniel mom was found dumped on the roadside, lying next to a fish and chip bag where four dead puppies lay. Cyclist Paul Skinner found her on the road in the village of Midville, Lincolnshire.

The dog was on its own, “sitting, licking the contents of a fish and chips carrier bag,” according to Mr. Skinner. He added that the dog appeared to have “tears in her eyes.” She was later found to be three years old with a microchip that was traced back to her original breeder, who is now currently caring for her. Fortunately, she is healthy and is now being called as ‘Carly.’

Mr. Skinner alerted the RSPCA, the police, and a local greyhound sanctuary to rescue the animal and the pups. They even tried to resuscitate the puppies, hoping that they just appeared to be dead and will be revived if they become warm enough. The mother dog even refused to leave their side.

Now, the authorities are appealing to anyone who might recognize the logo on the fish and chips carrier bag used to dispose of the puppies to know more about the dogs were abandoned or where they come from.

Must Watch: Top 10 Biggest Scams in the Philippines

Helpless Whale Shark Butchered Alive! How Would You React?