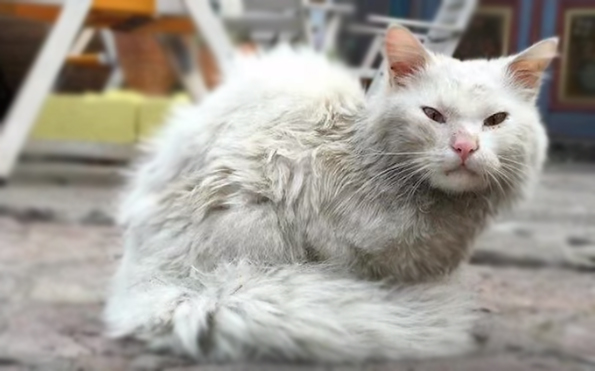 Perhaps one of the best stories involving refugee families is that of Kunkush and his reunion with his family.

A family composed of six – a mother and five kids – left Iraq on a boat to Greece in November for a better future. They couldn’t leave their pet cat behind, so he brought him with them on the dangerous journey across the Mediterranean Sea. But when they reached the shore, the cat took off, frightened.

The family had to leave and find a new home, so the cat was found loitering around the Greek fishing village of Skala, until international volunteers started to take notice, feed, and care for him. When American volunteer Ashley Anderson and her friends, Michelle Nhin and Amy Shrodes, found him, they immediately started a campaign online to look for the cat’s family, whom they temporarily nicknamed Diaz, the Greek name for Zeus.

They started a Facebook page for him called “Reunite Dias,” despite criticisms that they are wasting time and effort on a cat. But the volunteers pushed on, determined to reunite him with his family. They believed that successfully doing so would give the refugees “a little beacon of hope,” as Anderson had said in an interview with The Dodo.

During the search for the cat’s human family, Anderson flew him to Berlin, where he was placed in a foster home. The social media search continued, while his foster family promised to adopt him if they still could not find his family.

Finally, on Valentine’s Day, the volunteers’ search efforts paid off! Kunkush’s family found him through a story posted on The Daily Mail UK. It turned out that his family has already resettled in Steinkjer, Norway.

Kunkush and his family were reunited via a Skype call at first, before he flew all the way from Berlin to Norway.

Watch him reunite with his family in this video clip! Just make sure to prepare some tissues as you feel that heartwarming moment when Kunkush finally found his way back home.

Among Most Unexpected Pets Anyone Can Have! You’d be Shocked!

Blindfolded Husband Picks Her Wife Among Many Women. Would He Make It?