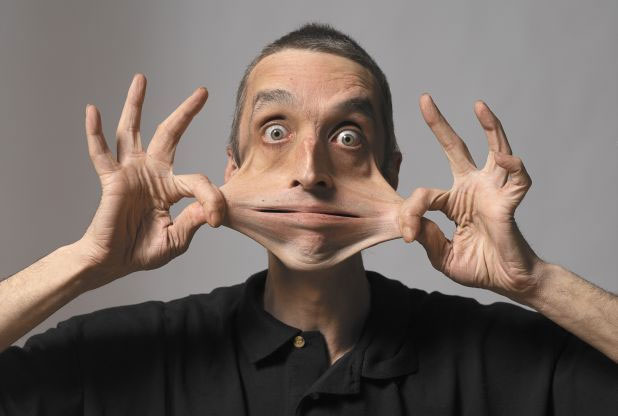 Tom is one of the few people, around eight of them, with the condition called Myelodysplastic Preleukemic (MDP) syndrome. This prevents his body from storing fat under his skin, hence his zero body fat. Just like those who suffer from MDP, Tom also has sunken cheeks, eyes, and withered lips. 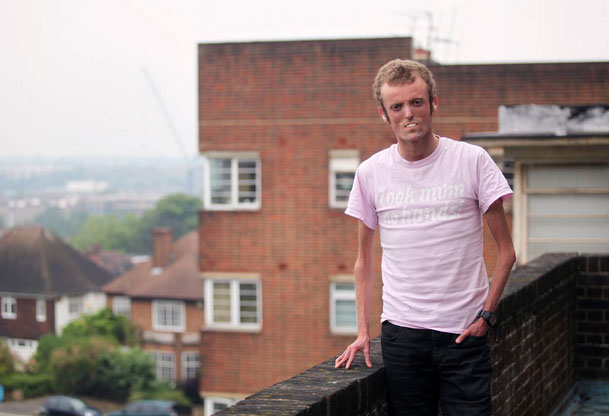 About 96% of Yu’s body is extraordinarily covered in hair. This Chinese man suffers from hypertrichosis, a condition that causes hair growth to be two times as fast as in ordinary people. It is also known as the werewolf disease. His condition brought Yu to the limelight, especially after having been on several TV documentaries and YouTube videos. However, Yu doesn’t want his condition to rule his life and is now determined to become a rock star. 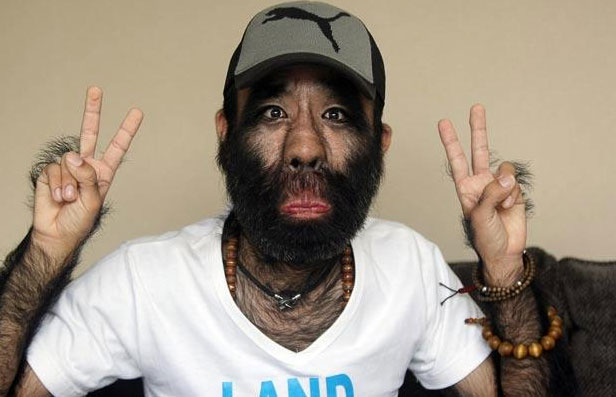 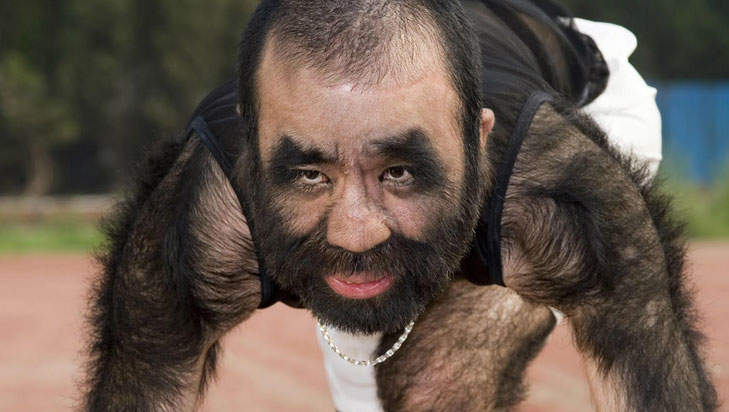 Kaleem has hands so much bigger than the rest of his body. In fact, his hands now weigh more than his head. Sadly, this Indian boy has to struggle with doing even the simplest tasks, such as tying his shoelaces, due to his gigantic hands. When he was a baby, his hands were twice as big as the hands of an average baby. Now, it has grown to become more than 12 inches long, from his index finger to the base of his palm. 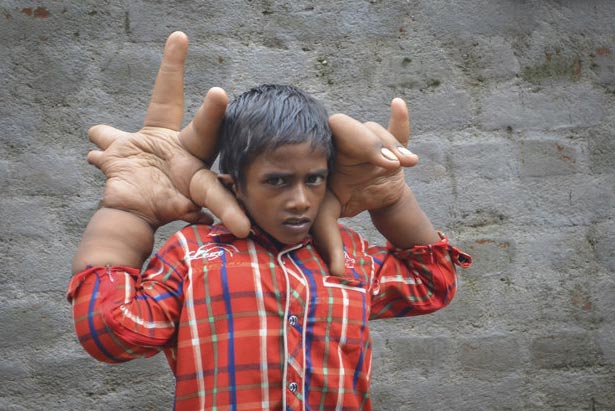 When Stan Jones panicked about Year 2000 being the year when computer programming might be dealing with trouble and might cause computers not to save his medical records, he did something about it. He started consuming eight ounces of colloidal silver for two years, although no one knew what his health issue was. Now, everyone knows not to consume silver if they don’t want to look like a Smurf, with blue skin. Stan’s color, unfortunately, cannot be reversed. 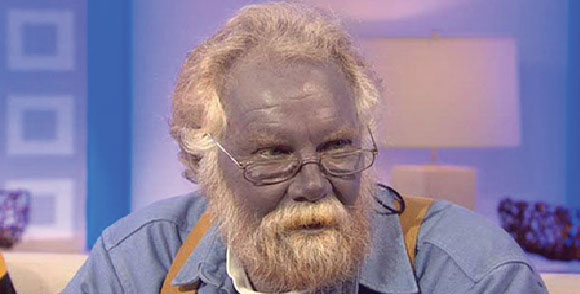 This super pierced man certainly proved that he’s not afraid of pain. In fact, he absolutely loved it that he got 453 piercings. He has 94 piercings in and around his mouth, eight in his nose, more than 30 in his ears, three in his nipples, and two in his tongue. But there’s more. Surprisingly, he has 272 in his genitalia. Ouch! 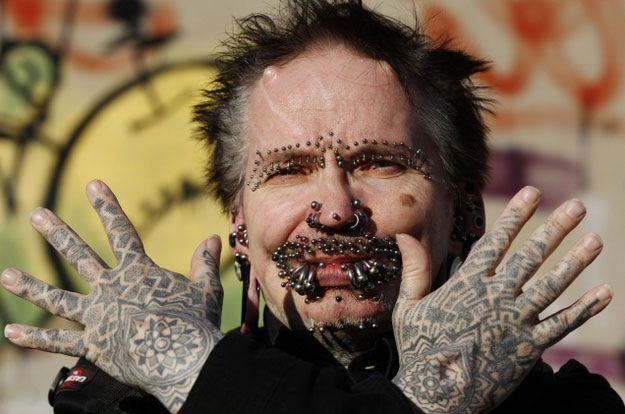 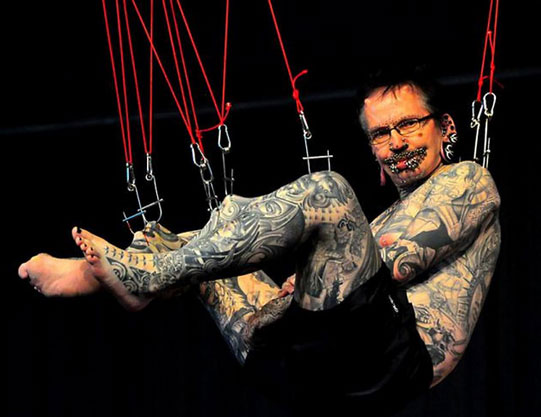 This poor boy from Columbia was born with Congenital Melancytic Nevus, also called the giant mole disease. His mole grew so big that it covered up his entire back and became a huge risk to his health as it behaves like a parasite consuming all his nourishments. Fortunately, Didier had a successful surgery to remove the mole. Now, he’s enjoying a normal life as a child. 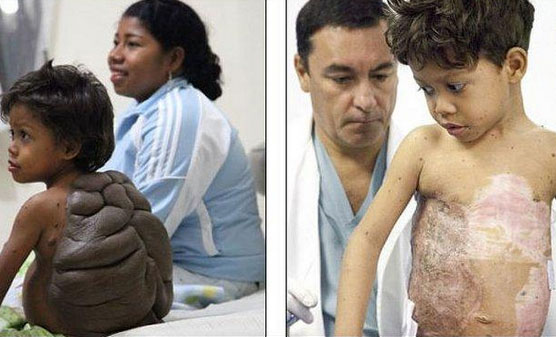 He is the smallest person in the world at only one foot nine inches. His small stature is caused by primordial dwarfism. What is even more surprising in his case is that he’s already 74 years old, when most primordial dwarves have an average life span of 30 years due to the complications of their condition. Chandra hails from Nepal with two brothers and sisters of normal height and three other brothers who are less than four feet tall. This meant that genetics played a strong part in determining his condition. 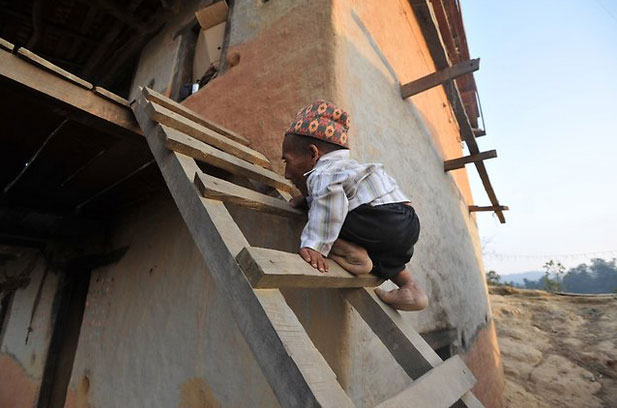 This man from Lisbon, Portugal developed a facial deformity that grew into a huge humor weighing over 5 kg on his face. It all started with a growth on his lips when he was 14. Now, it caused him to go blind and made it difficult for him to eat, breathe, and sleep. He didn’t seek treatment due to several misdiagnosis, lack of proper medical information, lack of money, and religious beliefs. In 2010, he finally underwent four successful operations in Chicago to remove the tumor and went back to Lisbon for his recovery. 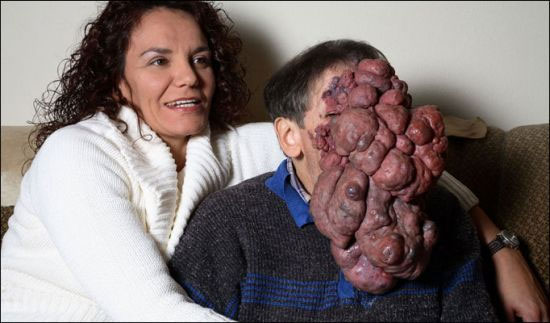 This man from the Philippines suffers from a rare condition called Craniopagus parasiticus. He has a parasitic twin and is the oldest person alive with the condition. He has an extra pair of arms and a leg attached to his abdomen and pelvis. He also has extra attachments in the form of an undeveloped head with a hair and an ear as well as an extra pair of nipples. During his time with a circus, he was called the ‘Octoman.’ Although he had the option to undergo surgery in 2008, he declined, saying he had grown attached to his extra parts.

Leonid hails from Russia and made it to this list because of his astonishing 8 feet, 5 inches height. His condition was triggered during a brain operation when he was just 14 years old that led to a tumor growth in his pituitary gland. The tumor couldn’t be removed and while it stayed in his brain, it continued to push his gland to produce more growth hormone, hence his giant stature. His shoes are of a US size of 28. He used to hold onto trees and buildings to stand straight. 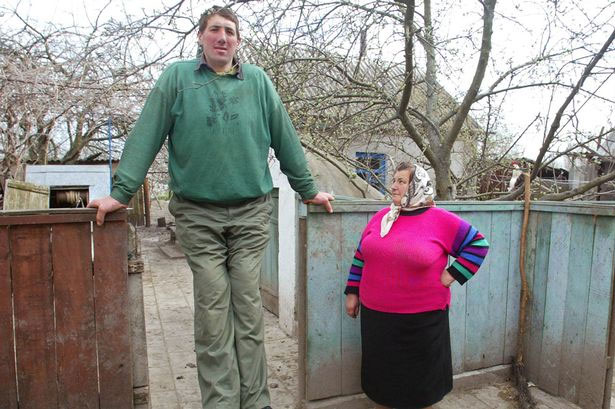 This old man has not bathed in over 60 years, making him possibly the filthiest man alive. He lives in Farasband, Iran, surrounded by dirt, animal feces, and garbage. He lived this kind of life because he chose to do so. It is said to be due to an emotional setback that he encountered in his younger years. 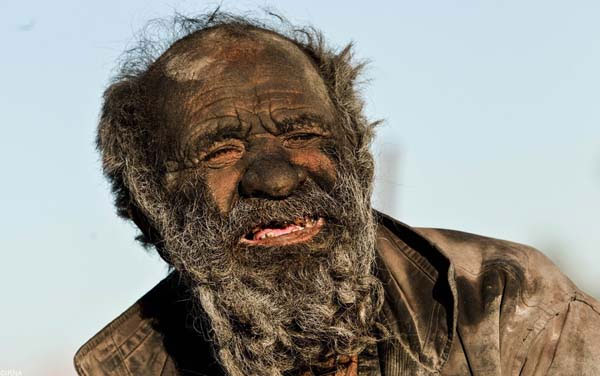 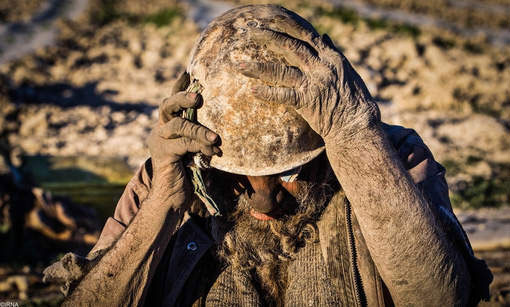 At 1,126 pounds, Patrick is one of the heaviest men in the world, earning him the nickname “Half Ton Man.” At his heaviest, he wasn’t able to leave his bed for more than seven years. When he needed medical help, rescuers had to break his entire bedroom wall to let him out. He needed to lose weight fast or he’ll die, so he underwent a gastric bypass surgery in 2005 and has excess fat and skin removed from his stomach. After exercising for a year, he lost 900 pounds, but he gained it all back in 2007 and went back up to 560 pounds. 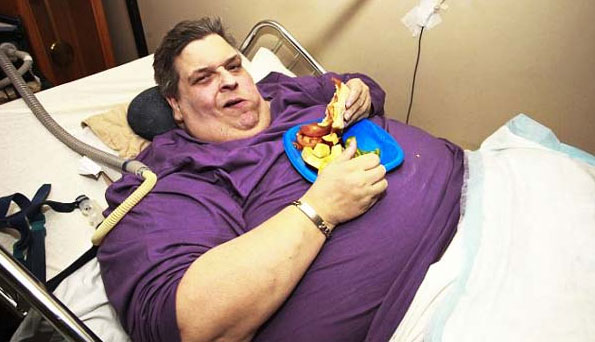 This 40-year old Lithuanian was hailed as the World’s Strongest Man in 2009, 2010, 2012, and 2014. He started in the strongman competition when he was just 17 years old. In his second power lifting competition, he broke all Lithuanian records. He also won as Lithuania’s Strongest Man in 1998 and seven more times after that before he finally challenged the world and became the ‘Big Z’ that he is now. 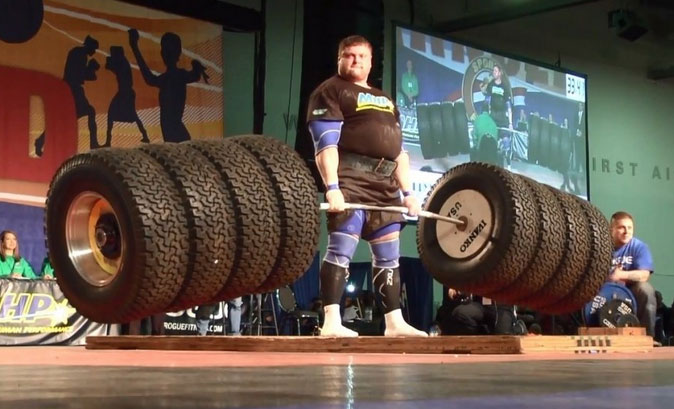 This Indonesian man has to live his life with the burden brought about by an ultra rare fungal infection called Epidermodysplasia verruciformis. This condition causes hard and huge fungal growths on his skin that look like a tree bark. Since his hands and feet are weighed down by the growths, he could not even perform basic tasks. In 2008, he went to the US to have 6 kg of fungal growths removed. In 2011, he underwent further operations, although it didn’t cure his condition. 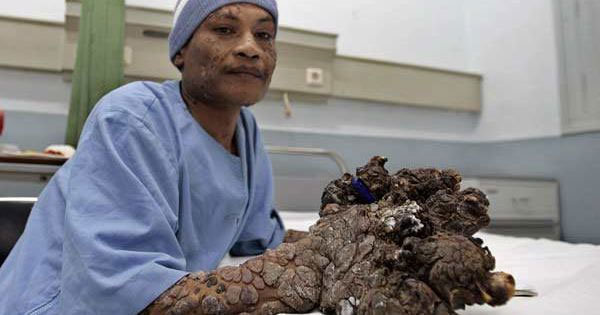 He is the stretchiest man in the world, earning him the moniker “Stretch.” He has held the record of having the stretchiest skin in the world since 1998. He can stretch the skin of his stomach to as long as 15.8cm due to a condition called Ehlers-Danlos Syndrome. It is a disorder of the connective tissues affecting the internal organs, ligaments, and skin, as well as skin-strengthening collagen sets the elasticity of the skin. Its manifestation is in the loosening of the patient’s skin.

He is possibly the man with the biggest mouth in the world as it measures 17 cm. He rose to fame when videos of his jaw-dropping mouth stunts went viral. The Guinness Book of Records tracked him down and found him in his Angola hometown. To further prove that he truly has the biggest mouth in the world, he joined a competition called the “Big Mouth” and won when he put a Coke can in his mouth.

He has a 6.8 meter-long hair, making him the man with the longest hair. He grew his hair for 50 long years without cutting it due to superstitious beliefs that it would make him sick. He firmly believed it after seriously getting sick the first time he cut his hair when he was just 25 years old. And in those 50 years, he only washed his hair a few times. Hay died of natural causes at 79, in his home province of Kien Gang. 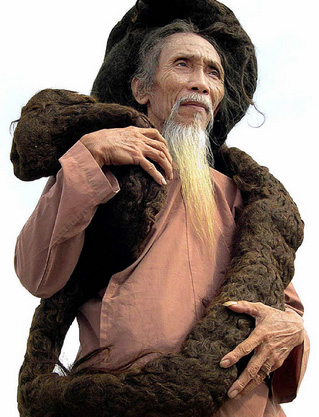 This man from Turkey is believed to have the biggest nose in the world as it measures 3.46 inches.  This was based on the measurements done on the set of the show called Low Show dei Record in Rome, Italy in March 18, 2010. 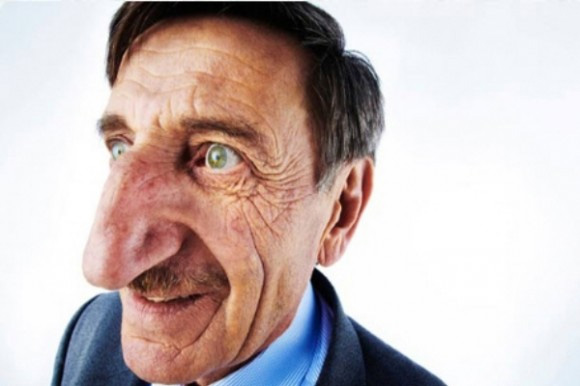 With a mustache that is 4.29m, Chauhan is believed to have the longest mustache that he has to groom for at least an hour every day. He has grown it for more than 30 years. His facial hair even got him  a role in the James Bond movie called ‘Octopussy.’ Chauhan still holds the record bestowed upon him by the Guinness Book of World Records. 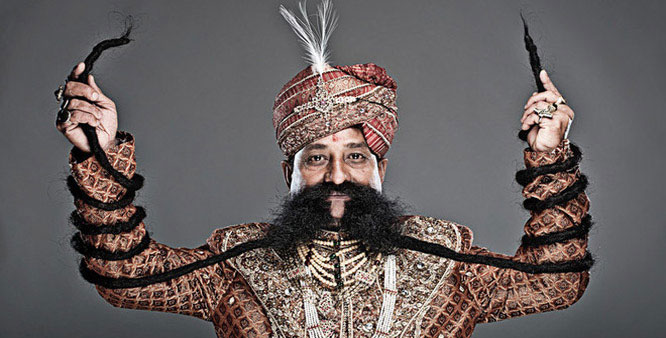 Byron has the widest tongue in the world, measuring 8.57 cm at its widest. This man from Syracuse, New York had his tongue measured on November 2, 2014. His daughter, 14-year old Emily, also has an impressive tongue width of 7.3 cm. 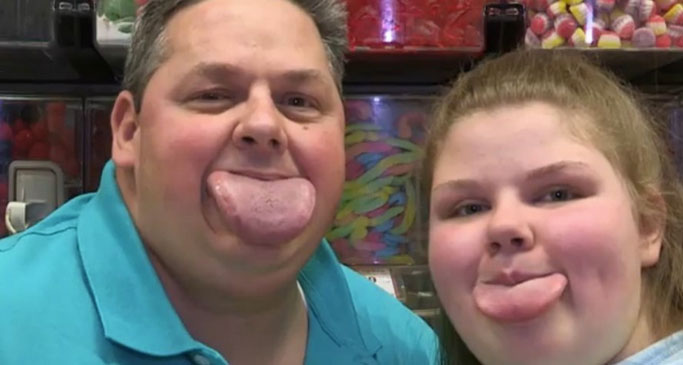 It’s all tongue business in here. Stoeberl has the longest tongue, measuring 10.1cm. He hails from California, USA made it to the new Guinness World Records 2015 book, thanks to his supersized lingua. The length of his tongue allows him not only to reach his nose, but also his elbow, and lick it, although he says he has to spend more time brushing his tongue to keep it clean. 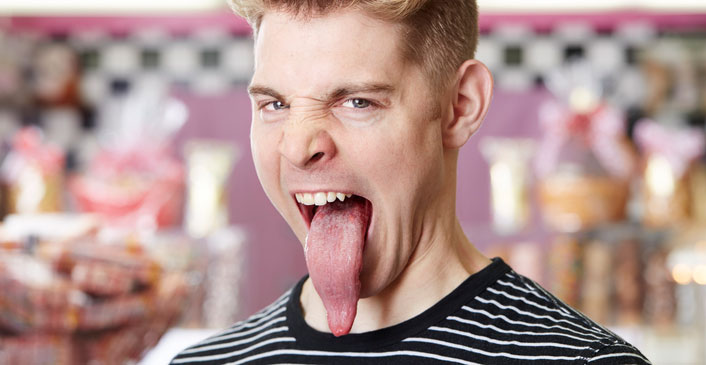 All four kids of Mario and Angie Gaulin are albinos. Sarah, Christopher, Joshua, and Brendan were all born with the rare genetic condition called oculocutaneous albinism. Their father is an albino and their mother also carries the gene. 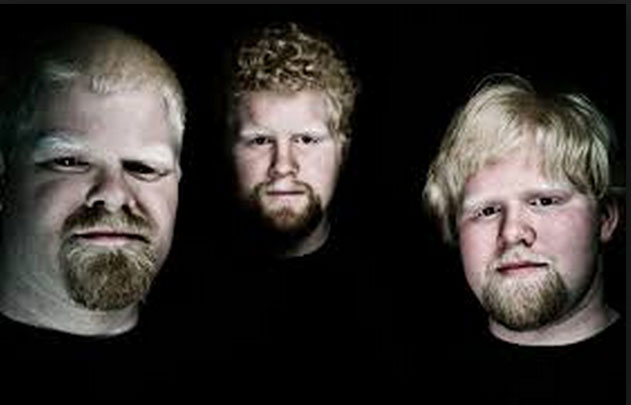 Boothe is the proud owner of the longest fingernails in the world. 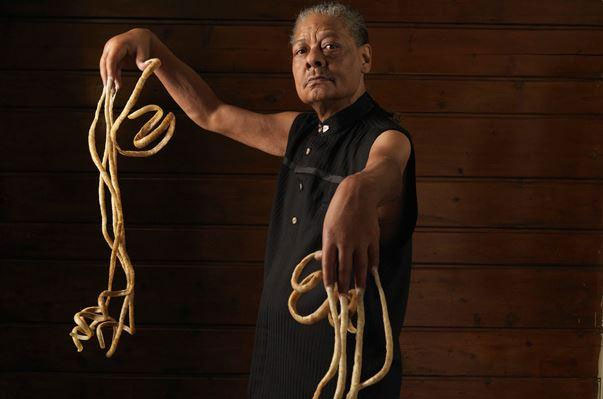 It took 1,000 hours for hi tattoo artists to cover every exposed skin in Rich’s body with tattoos. Even his eyelids, ears, gums, and the delicate skin between his toes are tattooed with black ink. Now, he is in the process of getting white design tattooed on top of the black, then colored designs tattooed on top of the white. 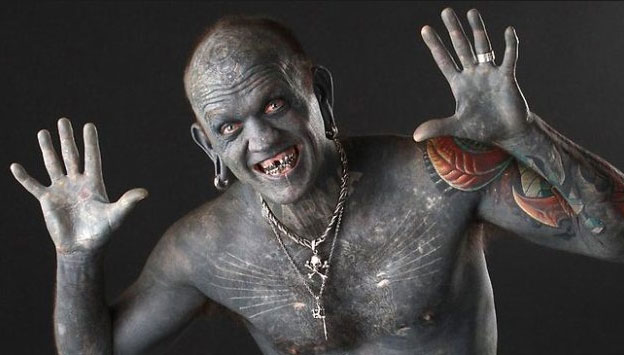 He is the real-life Elastic Man! His body is so flexible he can wind his arms effortlessly around his back, wrap his legs over his head, and drink from a Coke bottle held by his toes to his mouth. It all started when he became interested in martial arts that he started curling up in boxes or crawling through tight spaces. His flexibility has earned him the nickname “Rubber Man” in India. 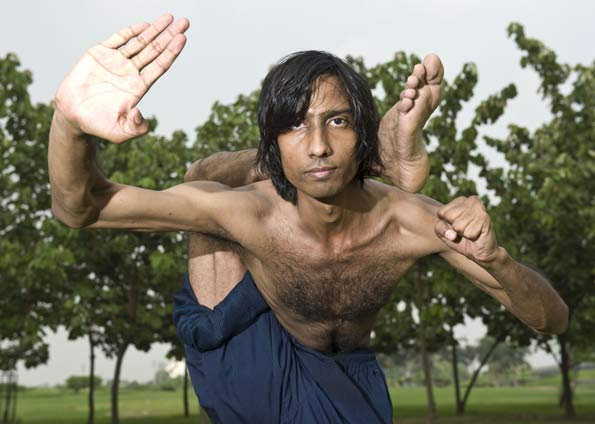 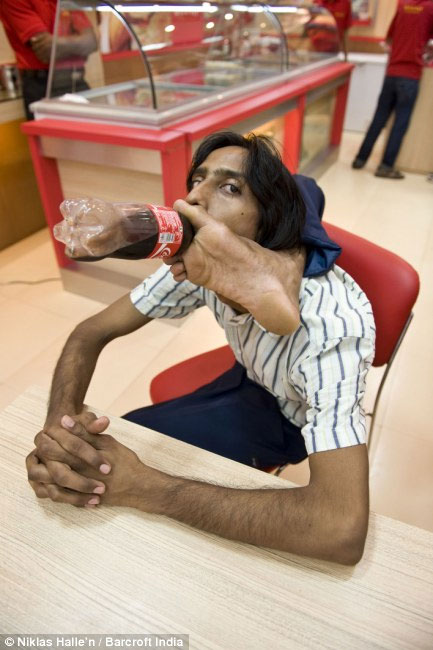 10 Pets that Seemed Useless Until They Did This