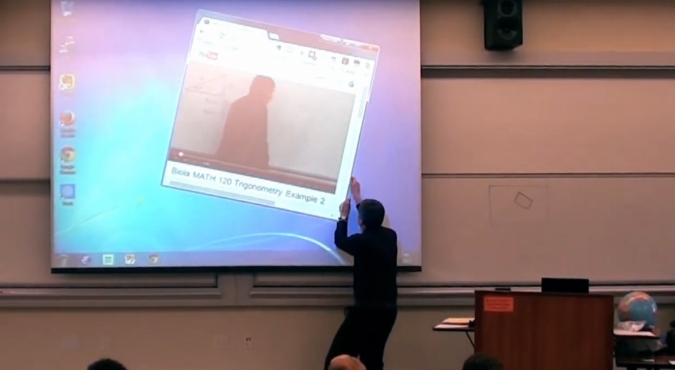 This teacher found a unique way of using projectors more effective during lectures. He succeeded in getting more attention and rousing the interest of his audience–apparently a class of teenagers–while teaching on a rather boring subject, Math. He made his projected video presentation function independently of him, and soon go against him in a funny way.

But the alter ego got the better of him and the real professor was eventually locked into the video frame and his alter ego switched him off to make him disappear. Then the alter ego came out of the video and assumed lecturing the class.

It was a hilarious scene that his audience loved. If it was a class of students he was lecturing to, he surely got their interest in his favor and one could only imagine how that helped the entire lecture go well.

To see wow the video presentation started acting independently and going against the professor, watch the video now!

Man Goes Into a Pool Full of Hungry Piranhas. You Won’t Believe What Happens Next

Instead of Mountain Climbing, They’re Crazy about Tower Climbing. See What Happens