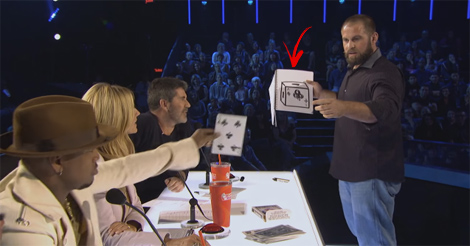 America’s Got Talent has seen a long parade of talents, skills, and tricks before. Card tricks are particularly staples in the talent show, but just what did this man do to get a Golden Buzzer? It ought to be extra special to impress at least one judge!

The man auditioning is pro footballer Jon Dorenbos, the Philadelphia Eagles’ long snapper. You’d think from his profession he’d do something related to the sport… until he whips out bigger-than-the-usual deck of cards. He lets Ne-Yo pick a card and he did – the Five of Clubs.

Dorenbos obviously knows how to play with the audience, teasing the judges at first with his drawing, while trying to guess what card Ne-Yo picked. The audience let out a collective “aww…” of disappointment when Dorenbos first drew an Ace of Clubs because it wasn’t the chosen card.

The pro footballer then went on to draw some more, even fist bumping with judge Simon Cowell after he drew a deck of cards, saying that Ne-Yo’s card is in there somewhere! The audience laughed, of course!

But Dorenbos’ magic trick wasn’t finished… Far from it!

Click on the video below to see whether he got his guess right and how his drawing could help his trick, so much so that Ne-Yo pressed the Golden Buzzer!

Jennifer Lopez Feel The Light: A Galactic Performance Amid Planets and an Audience

If Perfect Romantic Love Were Possible, This is How It Would Probably Look Like. And It has to Do with Rubber Shoes!

Top 15 Most Daring Exotic Delicacies Around the World