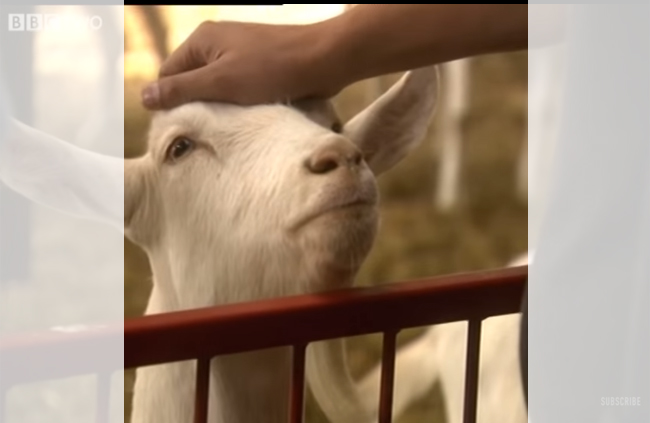 Professor Randy Lewis of Utah State University developed one of the most interesting creatures in the world – the spider-goat.

If Marvel has Spiderman, we now have a spider-goat in real life. Lewis took DNA that develop dragline silk from spiders and incorporate it into the DNA of a milk-producing goat. As a result, the goat would produce milk with an extra protein. The silk is then extracted and spun from that excess protein.

Despite the addition of a new DNA into their goat DNA, spider-goats, despite how much they look like regular goats, produce a hearty silk. This is the same silk that is quite in demand in the medical field, hence the need for more silk-producing goats. Spider silk is elastic and strong, making them perfect for several medical applications, such as making artificial tendons and ligaments, jaw repair, and eye sutures. It is even used in making airbags and bulletproof vests.

During the creation of spider-goats, not all goats ended up with a spider-goat gene. In February 2010, seven goats were born, but only three out of the seven had the gene. When the spider-goats get pregnant, have kids, and start producing milk, the researchers gather the milk promptly and purify the silk protein to obtain ‘higher quantities’ of silk.

The creation of spider-goats helped solve the dilemma of getting a generous supply of silk, which used to be a problem when everyone relied on the spiders. One needs a large number of spiders to cater to the demand for spider silk. The problem is that spiders are naturally territorial, so they don’t thrive as much in spider farms, where they often end up killing each other.

The spider-goats may lactate spider silk protein, but they seem to share exactly the same appearance, health condition, and behavior as the other normal goats.

With the success of the development of spider-goats, the scientists are eyeing alfalfa plants as their next target, hoping to find another great source of silk. The said plants are perfect for the experiment because of their 20 to 25 percent protein content, which makes them ideal produces of spider silk.

Watch the spider-goats here, what they look (they look surprisingly like normal goats), and how they move, as Prof. Lewis showed them to BBC 4 Inside Science host and geneticist Adam Rutherford:

Burglary and Murder in Broad Daylight Just Along a Busy Street. What Would You Have Done?

Watch: Robbery Gone Wrong When Victim Pulls Out A Gun!