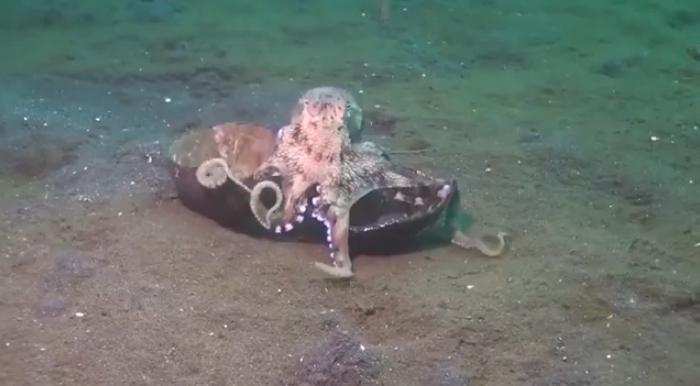 Like human beings, some sea creatures sometimes get tired of their usual neighborhood (or dangerous surroundings) and decide to relocate, as this smart octopus is shown in this video. What makes it smart is its mobile home–what looks like a coconut shell or pottery cut in half. The octopus carries each half with a tentacle (or arm) and “walks” with its 5 or so other tentacles underwater.

After covering some distance, it decides to stop (and also appears exhausted) and watch what it does with its mobile home. Where in the world did it get the idea of sheltering inside broken halves of a coconut shell or pottery? Did the octopus learn it from a crab or turtle, or was it a crab or turtle before it became an octopus? Some sea creatures have wild imaginations.

To see what weird imagination this octopus has, watch the video here!

Let’s Zoom Out, Out, and Out Until It’s Just a Speck in the Sky

Proof that Spiderman lives in India? Watch This To Believe It!

Top 10 Most Haunted Places In the World