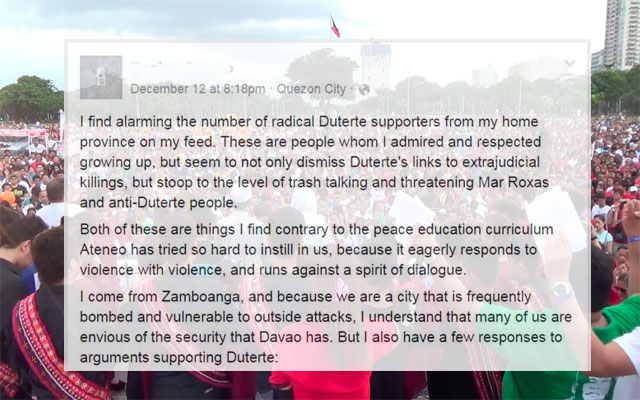 Are you still in the process of weighing your options in next year’s presidential race?

If so, read what a Netizen, who hails from Zamboanga, has to say about the arguments thrown about by the tough mayor’s supporters. She discussed Duterte’s stands on Death Penalty, Mindanao’s interests, Handling Rebels, the Possibility of a Martial Law, and the truth behind the “allegations” against the mayor.

Let’s be responsible voters and do our best to use critical thinking in deciding who to vote for next year. The future of our country in the next six years lies in our hands. 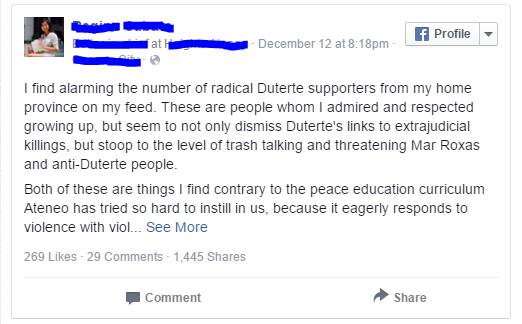 “I find alarming the number of radical Duterte supporters from my home province on my feed. These are people whom I admired and respected growing up, but seem to not only dismiss Duterte’s links to extrajudicial killings, but stoop to the level of trash talking and threatening Mar Roxas and anti-Duterte people.

Both of these are things I find contrary to the peace education curriculum Ateneo has tried so hard to instill in us, because it eagerly responds to violence with violence, and runs against a spirit of dialogue.

I come from Zamboanga, and because we are a city that is frequently bombed and vulnerable to outside attacks, I understand that many of us are envious of the security that Davao has. But I also have a few responses to arguments supporting Duterte:”

Click Next to read her opinion “On Death Penalty”.

“Last year, we covered a story that required us to spend five weeks in New Bilibid Prison. Contrary to stereotypes, a lot of inmates expressed regret and will to move on from what they did wrong, crimes committed out of passion or a lack of education. They channeled their energy into a better life for themselves, even with life sentences. They volunteered at church and in the hospital. They made art. They went back to school.

These things would not be possible with a president like Duterte, who upon instating the death penalty, will not give these people a second chance at life. Duterte provides a band-aid solution for crime without looking into the reasons why people commit them in the first place, such as poverty, lack of education, and unemployment. He talks about law and order against petty criminals, but there is a lack of discussion for addressing the primary source of what led them to crime in the first place.

I have to agree with Roxas when he says that it is not the penalty, but the assurance that these criminals can be caught that matters. Crime rate in the US persists despite the death penalty. Even then, Newsweek reported 1 in 25 killed by the death penalty turn out to be innocent. Is this worth the sacrifice of a lower crime rate? Can I truly sleep soundly at night knowing that the cost of my safety is the safety of another person, including the innocent? Not for me.”

Click Next to read her opinion about his [Duterte] interest in Mindanao.

2. That he has the best interests for Mindanao at heart

“Even if Duterte wanted what was best for Mindanao, his endorsement and selection of Senator Alan Cayetano is counterproductive to this cause. Cayetano is probably the most politically incorrect person in matters of Mindanao, and not only because of his withdrawal of the support for the Bangsamoro Basic Law.

At the senate hearing on the Mamasapano clash, Cayetano implied that the MILF—which the government had worked so hard to negotiate with—was a terrorist group. First, there is a stark difference between armed insurgency and terrorism. But never mind that; if you watched the hearing, Cayetano frequently exchanged the words “Muslim” and “terrorist.”

Choosing Cayetano to be his VP is disappointing at best for a Mindanaoan representative, and destructive at worst for the peace process because it cements a lack of understanding of Duterte’s officials for Mindanaoan context. It is, I think, telling of a lack of discernment over who and what is best for Mindanao and our Muslim brothers and sisters.”

Click Next to read her opinion about Duterte handling rebels.

3. That he handles rebels well

“He handles them so well, in fact, that he even called for the immunity of Nur Misuari in 2014. Misuari, by the way, led not just one but two sieges in Zamboanga City.

To Zamboangenos who support Duterte and who remain angry about the 2001 and 2013 hostage takings, are you absolutely sure that you want this man to be your president? I am not asking for a war against the insurgent groups or an assassination of Misuari, but what I am asking for is justice.

When a guy is willing to kill uneducated petty criminals for drugs and theft, but willing to forgive a fully educated person responsible for 100 deaths in 2001 and over 200 deaths in 2013, even possibly granting this same murderer authority over a region of Mindanao again, then we have to seriously reconsider how we rank the gravity of our crimes.”

Click Next to read her opinion about Martial Law.

4. That martial law is a far-off reality

“It is not. Duterte himself identified as a dictator.

Martial law rule would not be a distant possibility because relying on the police force would be easy to do locally, but difficult to apply nationally. The only way to assure uniform law and order is through tapping into the military, which Duterte himself admitted he would do.

While the military has humbled itself since the Marcos regime, it is not a good idea to trust them with this kind of power again, not while the nostalgia for martial law power drifts in its ranks. Even though the judiciary could attempt to check and balance abuses, it will be difficult to do with one party holding the gun.

People go on to say that Duterte respects democracy and media. However, this respect is difficult to uphold when you arm one party. Moreover, Davao is not exempt from its fair share of media killings. Three Duterte critics have mysteriously been killed in 2003, 2004, and 2007 under Duterte’s watch. These crimes remain unsolved to today.

I am not saying that Duterte himself is responsible for these killings—that would entail due process, which by the way Duterte does not want to grant people—but it shows that even the media is not safe under his watch.”

Click Next to read her opinion about Duterte’s Allegations.

“Some of his supporters argue that he doesn’t really mean what he says, that he only gives threats to scare and discipline people. However, there’s a difference between the abstract threats he makes (“If I have to kill you, I’ll kill you”) and an open confession.

And he did openly admit to human rights violations in a Rappler interview. Duterte told Maria Ressa that he had killed someone. If an average person made this admission, the world will demand that he do the time. Are things only an allegation if this is came straight from him?

Even if they remain so, it says something that nobody has stepped forward about the 700 people who were reported missing between 2005 and 2008. Whether or not Duterte is affiliated with these deaths, that 700 people went missing under his watch is a huge alarm bell.”

You don’t have to agree with me, but I invite people reading this to truly evaluate the values you say you hold dear vis-à-vis the methods you say you support.

I am a Zamboangeno, but I am not for Duterte. I am from Mindanao, but I don’t believe that you have to be rough and tough and full of testosterone to make things work. People who are for Duterte paint him as a macho man. But the bigger man for me is the person who can fight crime and violence with firmness and efficiency, but also with understanding. This is by no means an easy task, and I don’t know who could do it right, but I’m sure as hell it isn’t Duterte.

If you want peace in Mindanao, you don’t have to vote for Duterte. You can begin by fixing the manner in which you conduct yourself. By trash talking and threatening other people, you are by no means contributing to the peace that you say you want for Mindanao.

I find alarming the number of radical Duterte supporters from my home province on my feed. These are people whom I…

When You Combine Spider and Goat DNA, What Do You Get? See What a ‘Spider-Goat’ Can Do!